Notes from the Field: Playing for Change: Transforming the World with Joy

Co-founder of the Elos Institute and an architect by training, Edgard Gouveia partners with The Berkana Institute, travelling the world and teaching the principles of Oasis, inspiring communities to take their futures into their own hands and collaboratively create their dreams. With his large, expansive, easy presence and more than 15 years experience leading change in organizations in Brazil and abroad, Edgard exhibits an understanding of dynamic steering (flex-flow), orienting principles, the hierarchy of contexts, an understanding that people are at different levels in their awareness, a gift at helping all of us open to states in which joy, service and cooperation flow effortlessly, and a vision of the possibility of global change as something we all can access and co-create.

For Edgard, the doorway to inspiring collaborative action, generosity and increased awareness, is through joy and play. (If you are not into joy and play, then you definitely should read this). After spending four hours with him and sixty others at his Playing to Change the World seminar in Seattle, I am convinced he offers a way of being and relating that can contribute to transforming humanity through interiors and exteriors, individually and collectively, up and down the spiral and across cultures. I walked into the room knowing six people and I walked out with a desire to reconnect in collaborative action with this group that ranged in age from 10 to 65, from diverse ethnicities and races. By the end of the seminar I saw clearly how the qualities of joy, affection, play, concrete action and open-hearted embodied fullness could compliment, heal and strengthen our integral community, balancing our tendency to over-extend our strength of intellectual analysis.

Through a quick, simple exercise, Edgard imparted the first principles—move toward what feels good, stay in touch with yourself, join with others. That gave us permission to loosen, relax and open to our selves and one another throughout the day. Though very little time was spent in conversation, Edgard’s well-placed questions and short 3-5 minute group processes kept guiding and opening us to his profound teachings. His leading and teaching were masterful in this regard. Apparently it takes few words to move people to action.

One of the many games we played was the old version of musical chairs, where everyone is focused on competition and material acquisition (the chair) for personal gain. During this first round, we all noted that we felt competitive, possessive, and unaware of others. We then played a version where we were told that everyone needs to be seated but not everyone needs their own chair. 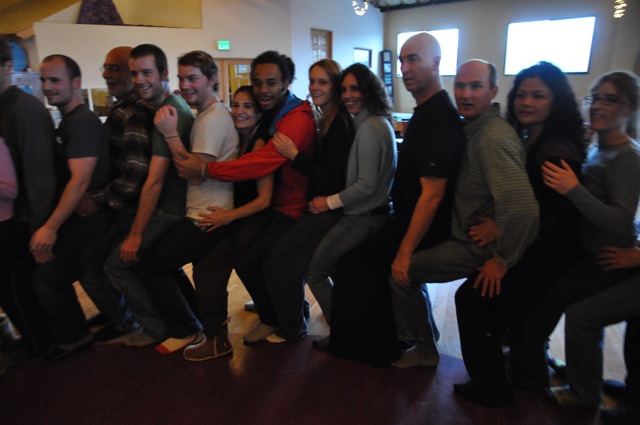 As we took more and more chairs away without losing any participants, something miraculous happened. When the music stopped, everybody had a place to sit. Instead of increasing scarcity, there was increasing abundance! Instead of operating independently and in fear of losing something, we were all sitting on each other’s laps, laughing, cared for by one another, warmed, held, protected, recognized. We looked at one another and became filled with appreciation; our hearts, faces and bodies opened and we felt connected, generous and caring. We began to dance, naturally, spaciously, playfully and creatively with each other during the music. We became this exuberant ecstatic, open-hearted, celebration of spirit, joy and life with each other! With collective generosity and creative intelligence all sixty of us sat on two chairs and then no chairs. Leaders spontaneously arose and receded as needed. The insights and revelations happened easily and moved me quite profoundly. If we all cooperate and take care of one another, there is enough to go around and we gain in happiness, security, and health.

For the last half hour, Edgard gave his teaching through a few inspired words, stories and videos. He said most people are spectators because they don’t know what to do; they are overwhelmed, or they are depressed by their own circumstances. But, he said, people really do want to help and contribute and everyone intrinsically is motivated by pleasure and joy. So if we create spaces and places where people can have fun, feel joy, open their hearts with others and do something good, they flock to it. He said this has happened repeatedly in the Oasis Games that have taken place in Brazil, India, and other cities around the world. In Santa Catarina, one of six cities in Brazil that were devastated by floods, Edgard and friends catalyzed a very successful rebuilding effort with no money. He believes that it was so successful because people were drawn by the kind of open-hearted, joyful collaboration we experienced as we played the games.

The Oasis Game and the Integral Movement 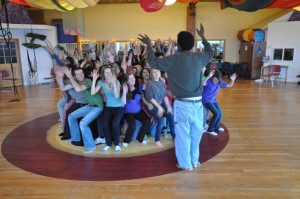 I was opened several times and touched very deeply during those four hours, as I felt the vertical levels of development collapse into a sea of joy and celebration for all life. I saw how many of us in the Integral community get stuck in independent agency and intellectual analysis like a flower growing up toward the sun still closed in a bud. And I felt the possibility of our blossoming and ripening, relaxing and opening to allow other ideas and communities to enter and integrate, coming and going, taking and giving, cross pollinating in ways that enrich us individually, enrich our community, and the entire planet. Perhaps if we as an Integral community would and could incorporate some of the Oasis Game practices and ideas into our salons and frameworks, we could actually become more effective at impacting large-scale change, up and down the spiral. I see us benefiting from more movement, touch, play, joy, embodiment, community and service in the world. 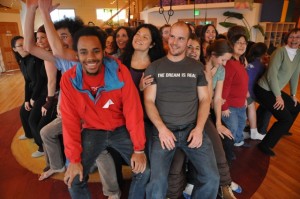 People are suffering all over the world. Edgard has found a way to mobilize people from many generational, educational, cultural and socio-economic groups into a collaborative community of action. If most of the world’s population are at red, amber and orange then moving them/us toward contextually aware, world-centric collaboration would be very healthy for our planet, wouldn’t it? Could this movement on a mass scale contribute to the health, cooperation and well-being of people worldwide, opening access to later stages of awareness and supporting a more equitable future for all? Could incorporating these principles into our own integral community enliven and empower us to greater wholeness?

Check it out on the original site!