Fun that helps change the world 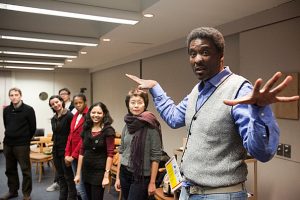 Edgard Gouveia Jr. delivers a lecture at the Harvard Graduate School of Design. Gouveia is a Brazilian architect and urbanist specializing in bioarchitecture and intuitive technology. He created the internationally acclaimed Oasis Game and Warriors Without Weapons program and is at the edge of applied research on how to change the world through play. Jon Chase/Harvard Staff Photographer

On Thursday, Harvard students played a game that is helping to change the world. Of course, anyone outside the small classroom in Gund Hall might have thought the students were just relieving academic stress and pressure, judging from their joyous shrieks of laughter.

Ah, but there was method to the madness. The maestro of the mayhem was Brazilian urban specialist, architect, activist, and social media game designer Edgard Gouveia Jr., who has won international attention for his approach to grassroots development and research on global change through play.

In 2008, Gouveia created the Internet-based “Oasis Game,” which first brought aid to a flood-devastated section of Brazil; soon “Oasis Games” were created for other parts of the world. He is continuing to bring together urban professionals and college students with residents to create relevant and useful public places through a new game, “Play the Call.”

In an appearance sponsored by the Latin and China Harvard Graduate School of Design groups, Gouveia began his presentation by asking students for their expectations for the evening. Students responded with questions like: How do you approach people without advertising something? How do you sustain interest? Mireille Kameni, an urban design master’s student, wanted to hear about increasing access to resources. Oscar Malaspina, also an urban design master’s student, was curious about language barriers. Another student asked, “How do you learn from failure? What happens when you fail?”

“We never fail,” joked Gouveia, who set a tone of levity even when approaching difficult issues.

While students caught their breath, he challenged them. “Who won the ‘1-2-3 game’?” “All of us,” came the answer. “Is it possible for a game where everyone wins?” he asked. Noted Caroline James, an architecture graduate student, “The punishment for messing up [students had to do a quick shimmy] was almost as fun as the game.”

Gouveia then showed how game-play principles were used to complete projects in poor areas of Brazil and Mexico. Young professionals formed teams (both on-site and via the Internet) to build bridges, schools, gardens, and parks in struggling areas.

But the rules are different from other aid projects. The professionals on-site must first find “three manifestations of beauty” in the community. They must listen to residents and press them repeatedly for their dreams, not just their problems

“You are not coming here to help them or save them; you are here to learn from them,” Gouveia said. Based on those dreams, teams build models for the community for feedback. Then they do the “miracle.” In five days, they build the project with local resources and minimum outside donations.

Harvard students were intrigued but wary. Malaspina was curious about differences between rural and urban areas. James wanted to know if the model changed according to different communities? No, said Gouveia, it was always the same. Alan Waxman, working on a master’s in landscape architecture, said Gouveia’s vision made him “want to sign up today,” but that very enthusiasm made him suspicious, citing the “if you find the Buddha, kill him” theory.

Gouveia insisted the game approach of connecting communities was “powerful,” saying, “I truly believe in the inner power of movements.”

After the event, Malaspina, who is from Peru, said he was “still processing” Gouveia’s ideas, stressing the need to match professionals with a community effectively. Kameni, who is from Angola, found both realistic and fantastical elements in Gouveia’s methods, adding “that is not necessarily a bad thing.” At communities she has visited, “The will is there, and often times the simplest project is the most effective anyways.” James singled out the need to switch from an outdated, “sympathetic” approach to an “empathetic” approach, with a “sense of wonder and curiosity when you’re working with people. I definitely agree with that approach.”

Elena Tudela of the Latin Design School group, which co-organized the event, was pleased at the turnout. “This is a first-hand experience of something that has been successful. So it is interesting to see those methods.” She said the games were “a very good example of how to create a sense of community.” Tian Ren of the China Design School group called the event inspiring.